Cyver Pentest: When is Pentesting Most Effective 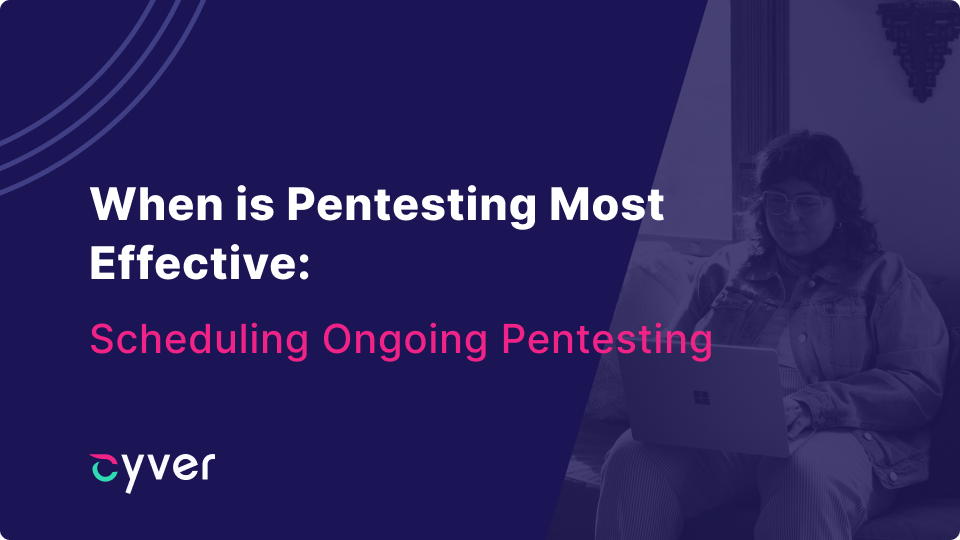 Most organizations are aware that penetration testing is an important part of cybersecurity. Whether you have to pass certifications, meet regulatory requirements, or stay compliant with PCI DSS or other standards, you need pentesting. Increasingly, organizations are investing in pentest-as-a-service, where pentests are delivered on a recurring basis throughout the year.

This is beneficial in many ways. For example, rather than spending time and budget sourcing a pentester to fill in compliance requirements, those same organizations can spend that budget on more pentesting and improved security. At the same time, you’ll have to align pentests with your schedule, with budget, and with development or other planning to ensure that pentesting is most effective and that you do get the most out of every pentest.

And, of course, pentesting can be part of future objectives and strategy without need to plan it immediately.

You Understand Your Assets

When you request a pentest, you set the scope of the test. That means asking the pentester to check a list of assets like websites, IP addresses, servers, etc. You have to have a clear idea of your environment, what dependencies exist, how assets are connected, etc.

If you understand how those items map in your environment, you can prioritize them based on risk and determine when and how to pentest them. When you have that detail and scope set, you can run pentests with better coverage and better results.

In any case where you run a pentest, it’s highly likely that vulnerabilities will be found. Your team has to be in a position where they can allocate resources to remediating those vulnerabilities. That means:

Reasons You Might Not Want to Pentest Right Now:

Getting Started with Pentesting

Eventually, the most effective time to pentest is when pentests align with development and update schedules, when teams are prepared to take on the work, and when you fully understand what needs to be pentested.

Once you have that in place, you can pentest and then immediately shift focus to remediation, ensuring your assets stay secure. And, of course, pentesting should be recurring. If you can map pentests to your development schedule throughout the year, fill that pentest schedule out with regular scans, and immediately react and allocate work to remediate as vulnerabilities are found you are making the most out of your pentests.

Cyver is a pentest-as-a-service team delivering recurring pentests through our pentest management platform, Cyver Core. We deliver pentests with traditional reports, as well as vulnerability findings as tickets, which you can export to Jira for better management and faster remediation. Plus, with metrics and a security dashboard included as part of our service, you can see, at a glance, where vulnerabilities are in your organization. If you’d like to learn more, contact us for a demo.

This website uses cookies to improve your experience. We'll assume you're ok with this, but you can opt-out if you wish.

This website uses cookies to improve your experience while you navigate through the website. Out of these, the cookies that are categorized as necessary are stored on your browser as they are essential for the working of basic functionalities of the website. We also use third-party cookies that help us analyze and understand how you use this website. These cookies will be stored in your browser only with your consent. You also have the option to opt-out of these cookies. But opting out of some of these cookies may affect your browsing experience.
Necessary Always Enabled
Necessary cookies are absolutely essential for the website to function properly. These cookies ensure basic functionalities and security features of the website, anonymously.
Functional
Functional cookies help to perform certain functionalities like sharing the content of the website on social media platforms, collect feedbacks, and other third-party features.
Performance
Performance cookies are used to understand and analyze the key performance indexes of the website which helps in delivering a better user experience for the visitors.
Analytics
Analytical cookies are used to understand how visitors interact with the website. These cookies help provide information on metrics the number of visitors, bounce rate, traffic source, etc.
Advertisement
Advertisement cookies are used to provide visitors with relevant ads and marketing campaigns. These cookies track visitors across websites and collect information to provide customized ads.
Others
Other uncategorized cookies are those that are being analyzed and have not been classified into a category as yet.
SAVE & ACCEPT